On the heart of the village of Palmela, discover the Wine Route House.

Meet the tasting menus and delight yourself with the best in this region in our outer lounge terrace, which provides a nice place for leisure with a nece view to Natural Park of Arrábida. Travel into a privileged region and discover this land of wine! Península de Setúbal Wine Route an invitation to your senses!

From regions of Central and Northern Portugal, should cross the 25 de Abril Bridge or Vasco da Gama Bridge, going through the motorways A2 and A12, respectively.

Coming from South, follow the A2 motorway. From Évora and Badajoz, use the A6 motorway, crossing the Alto Alentejo and following the A2. Coming from the South of Spain, the alternative is to go motorway Sevilla – Huelva, passing Vila Real de Santo António, continuing along the Via do Infante to reach the A2 motorway.

Exit from railway in Palmela, at the roundabout head towards Palmela. At second roundabout, exit at first right. Go straight ahead at the next roundabout. Turn left, where you will find directions Palmela Center. Climb the Avenida da Liberdade and park your vehicle. The Wine Route House is located in Largo de S. João Batista in front of the Cine Teatro S. João.
GPS: N 38º 34\’ 17,9\’\’, O – 8º 54\’ 09,10\’\’

By bus, from Lisbon Pick up the Campo Grande or Gare do Oriente bus destined for Palmela. To get to the Wine Route House, climb the staircase Joaquim José de Carvalho Garden, towards the Largo de S. João Batista. The Wine Route House is right across Cine Teatro S. João.

By train, from Lisbon Get the train in one of the following stations Roma-Areeiro, Entrecampos, Sete Campos or Campolide towards Setúbal. When leaving the station, take bus to Palmela. To get to the Wine Route House, climb the staircase Joaquim José de Carvalho Garden, towards the Largo de S. João Batista. The Wine Route House is right across Cine Teatro S. João.

Note: There is a railway station in Palmela, located in Aires, although still with reduced infrastructure level of interfaces. This option involves walking about 2,5 km and take the bus on the national highway.

“We tried to adapt the space of this old wine cellar from the 40s and maintain its wine characteristics. The building where the Casa Mãe da Rota de Vinhos is located is essentially of an agricultural nature.”
According to Tito Monteiro, responsible for the building’s conversion project, a large part of Largo de S. João Batista was occupied by Quinta da Cerca, which was at the beginning of the 19th century, considered one of the richest farms in Palmela, with a vast area of ​​orchard cultivated with loquats and oranges.

Around 1940, the owner, known as Mr. Carvalhinho, ordered the building to be built, with the aim of serving as his dwelling on the upper floor (space occupied by the local radio studios) and for use as a cellar on the lower floor (current space at Casa Mãe da Rota de Vinhos).
The Quinta da Cerca winery thus started the wine production process through the use of innovative manufacturing techniques for the time, beginning to acquire some notoriety.

However, this high level of development ended up leading Mr. Carvalhinho to less legal wine marketing practices, which led him to face problems with justice, culminating in the expropriation of the building.
In the 1950s, this space was taken over by Mr. Cansado Carvalho, a supervisor of the former National Wine Board.

After a few years, the cellar was rented to the company Emídio de Oliveira & Filhos and later, the building was sold to the Municipality of Palmela, which continued this rental until the property was re-qualified in 1998. The inauguration of the Casa Mãe da Rota de Vinhos took place on June 1, 2000, and also marked on this day, the Day of the Municipality of Palmela.

The main route was maintained, although the entrance to the building had been relocated. It used to be made by the place where the counter is located today. The access stairs to the first floor are similar to the existing ones, however they were more inclined, constituted in a single span and next to the deposit 3, close to the entrance of the service area. The tasting hall on the first floor was the access to transport grapes to the mills. 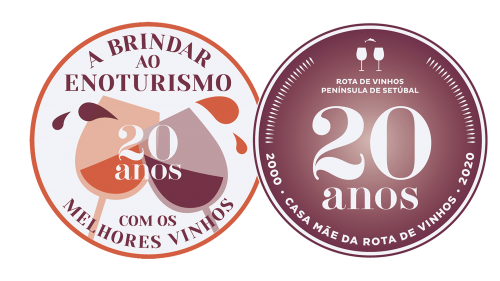 This website uses cookies to improve your experience while you navigate through the website. Out of these, the cookies that are categorized as necessary are stored on your browser as they are essential for the working of basic functionalities of the website. We also use third-party cookies that help us analyze and understand how you use this website. These cookies will be stored in your browser only with your consent. You also have the option to opt-out of these cookies. But opting out of some of these cookies may affect your browsing experience.
Necessary Always Enabled
Necessary cookies are absolutely essential for the website to function properly. This category only includes cookies that ensures basic functionalities and security features of the website. These cookies do not store any personal information.
Non-necessary
Any cookies that may not be particularly necessary for the website to function and is used specifically to collect user personal data via analytics, ads, other embedded contents are termed as non-necessary cookies. It is mandatory to procure user consent prior to running these cookies on your website.
SAVE & ACCEPT
Rota de Vinhos da Península de Setúbal

Welcome to the Rota dos Vinhos da Península de Setúbal.
To browse this site, confirm that you are over 18 and accept the privacy policy.
Be responsible and drink in moderation.